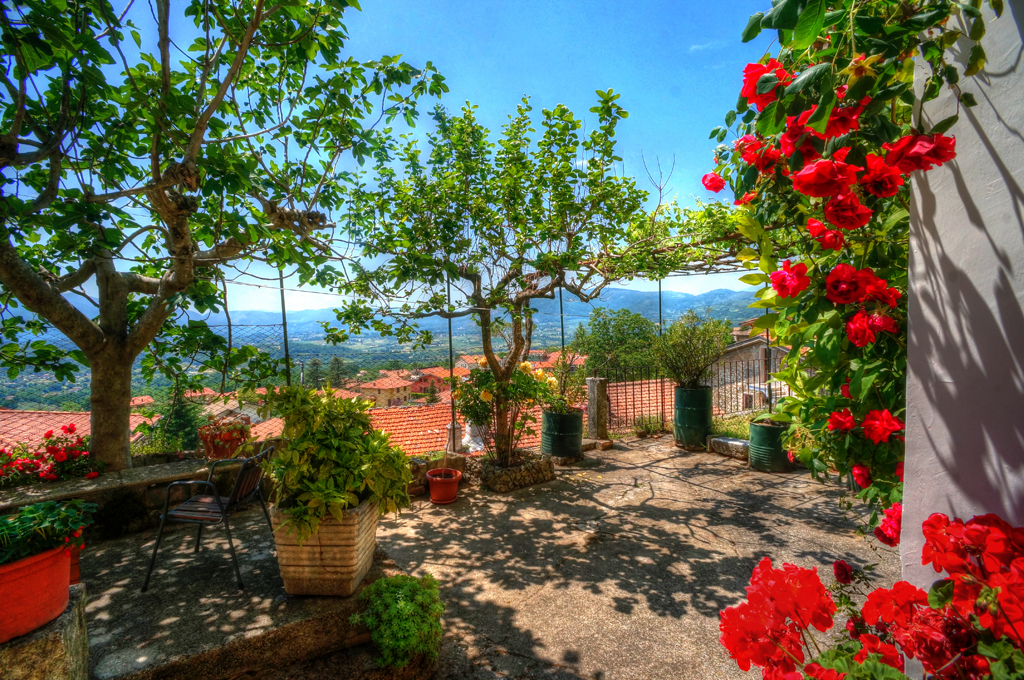 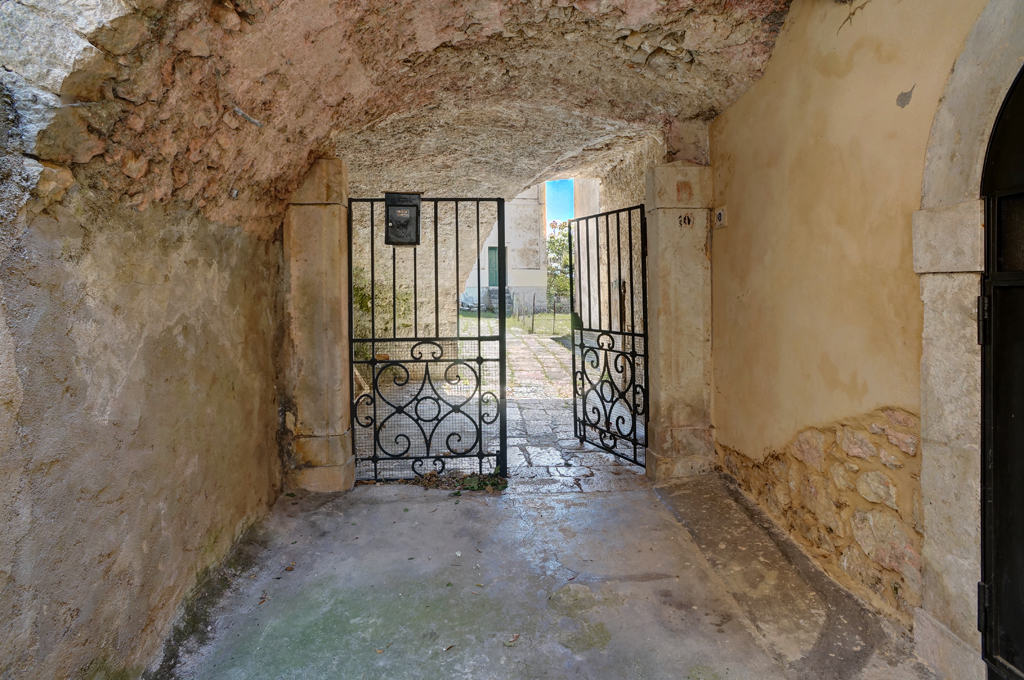 Casa Chiaie is a charming 80 sq.mt. pied-à-terre in the heart of the medieval hilltop town of San Donato Val di Comino, a picturesque historic stone-walled town with vistas across the valley of the Comino river.

This fully renovated apartment, ready for immediate occupancy, is part of an ancient and important historical building which was once a convent.  It enjoys an enchanting location, a few steps from the town centre but in a dominating postion with panoramic views.

The property has an independent entrance, accessed through a private courtyard from which also open both Casa Chiaie's cellar and woodstore.  The entrance to the property is reached along a short and typically medieval little street, a few steps from the town's main piazza.

A intricate wrought iron gate under an ancient stone-vaulted arch leads into to the stone-flagged courtyard from which it is possible to admire the panorama of the valley, immediately creating a feeling of space, light and wellbeing.  This romantic outdoor courtyard is ideal for al fresco dining with family and friends on warm Italian summer evenings, a magical setting for enjoying a barbecue or platters of typical Ciociaria cuisine and wine.

Casa Chiaie has been created from two large rooms and configured to include a well-fitted modern kitchen with open fireplace and grotto-type storage cut into the rock, a living room and a double bedroom with a bathtub / shower.

Particular features of the property are the oroginal stone-vaulted ceilings;  if desired, the impact of these could be even further enhanced by removing the plaster in order to reveal the ancient stone.  The kitchen and living room are currently separated by an arched partition;  if desired,  that could be removed to create an open living area, allowing the open fireplace in the kitchen to be enjoyed throughout the room.

The apartment is ideal as a pied-à-terre for relaxation in the beautiful Abruzzo National Park, or for purchasers who need only one bedroom as their permanent home.

The utilities for the apartment are autonomous; as well as the fireplace, there are also two reverse cycle hot/cold air conditioners in the living room and in the bedroom; the windows are double-glazed.   The external cellar creates a convenient place to store bikes and scooters; in addition to the cellar there is also a small woodshed.

The proposed sale price is negotiable and allows for the possibility of inclusion of the present furnishing.

SAN DONATO AND THE CIOCIARIA

San Donato Val di Comino is one of the many charming small medieval hilltop towns in the area of Italy called the Ciociaria, the name given to the fertile land that lies south of Rome but north of Naples, situated inland in the hills in the heart of Italy.

The Ciociaria region is within easy reach of both Rome and Naples and their respective airports. A day's shopping in Rome is a common pastime, while an even shorter drive brings you to the charming beaches south of Rome. Alternatively, drive east, and the mountains of the Abruzzo National Park await with horse trekking in the magnificent beech forests, and sparkling mountain lakes and rivers where you can swim in the heat of the summer. And at the other extreme of temperature, although San Donato itself is relatively temperate, a short drive brings you to the winter ski slopes.

Often overlooked, both by tourists and by those foreigners in search of an Italian home, in favour of the more publicized regions of Tuscany and Umbria, the Ciociaria remains largely an unspoilt gem with beautiful scenery and medieval hilltop towns. A home or second home in the Ciociaria, in the hilltop towns of San Donato, Arpino, Alatri or in the rolling countryside that surrounds them, will afford you a setting where over two thousand years of history combine with an idyllic rural Italian lifestyle, where you can still discover the 'real' Italy and take time out from the busy crowds of the larger tourist cities, while being less than ninety minutes journey from central Rome or either of Rome's two airports.

Via Romana Srls is an Italian-incorporated company owned by a British/Australian Chartered Accountant and her photographer daughter, and offers a package of services to facilitate all aspects of the purchase and restoration of Italian property by overseas clients. The Via Romana team works in collaboration with various fully-licensed Italian real estate agencies including Case & Casali Real Estate Agency represented by Sig. Ciro Tomei. Sig. Tomei has been enrolled in the register of real estate agents at the Chamber of Commerce in Frosinone, Lazio since 2007 and has much experience in the international marketing of Italian real estate.