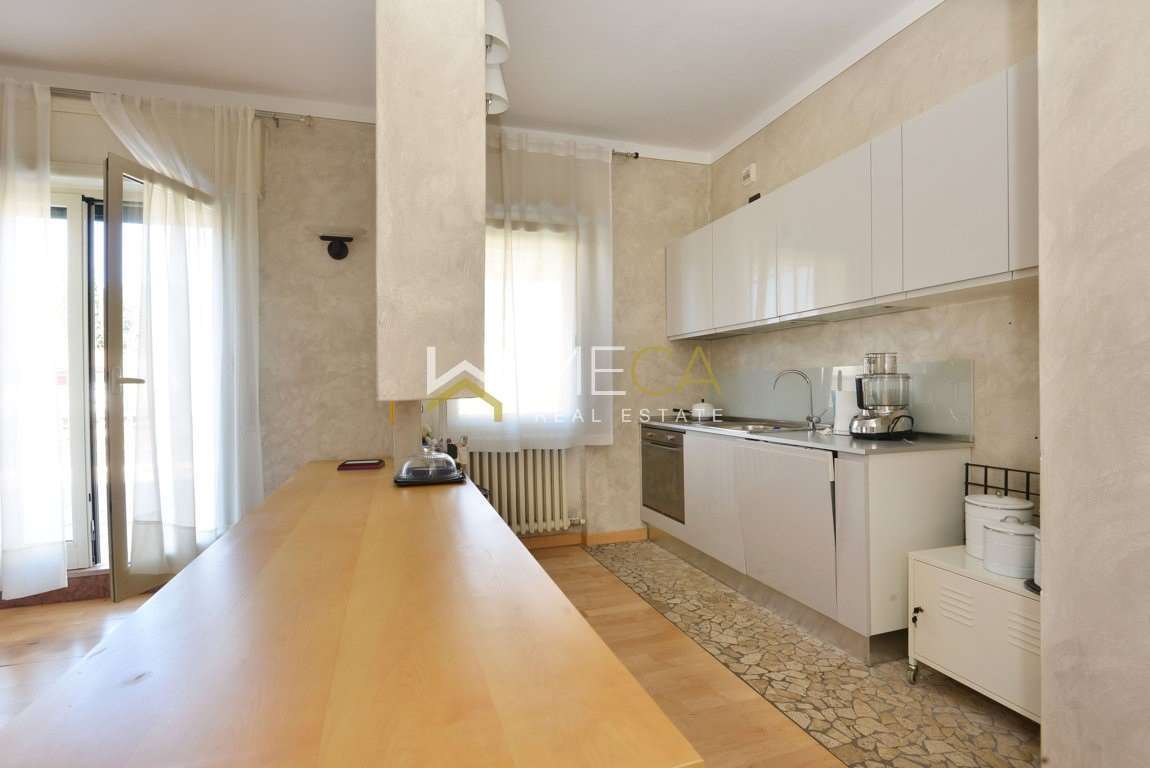 Saló, central location 5 minutes walk from Piazza Vittorio Emanuele and all services, important villa renovated in 2001 and large, totally independent.
Inseirta in a very quiet residential area despite the proximity to the historic center.
The villa is divided into two apartments : on the ground floor of 200 square meters with a kitchen and dining room where there is an 18th century fireplace, master bedroom finished with pink Portuguese marble and private bathroom with shower and bathtub, two other complete bathrooms with as many double and twin bedrooms;
First floor of 120 square meters and 80 square meters of terrace which can be accessed from the very large living area with open kitchen, 2 double bedrooms and as many bathrooms.
Basement with double garage with sectional, tavern with functional fireplace and various ancillary rooms.
On the ground floor there is an air conditioner, video intercom and electric shutters.
Insulation of the perimetral walls.
Several driveways and pedestrian entrances, possibility of building a swimming pool in the well-kept 750 sqm garden.

Monuments and places of interest of the place:

-Religious architecture
The cathedral of Saló, dedicated to Santa Maria Annunziata, represents the work of greatest architectural value, designed by Filippo delle Vacche in late Gothic style, never completely completed.
Inside it houses paintings by Romanino, Moretto, Zenone Veronese and Paolo Veneziano. Antonio Vassilacchi, known as the Aliense, painted several frescoes while the main altar is characterized by an imposing gilded altarpiece where ten wooden statues made by Pietro Bussolo are inserted. The facade, which is still incomplete, was subsequently embellished by the marble portal built by Tamagnino and Gasparo Cairano in 1509.
The monumental cemetery, built on the opposite bank of the gulf, on the project of Rodolfo Vantini.

The Palazzo del Podestà was the seat of the council of the Magnifica Patria, now the seat of the municipality. Part of the building is a reconstruction after 1901, the year in which a terrible earthquake brought the city to its knees.
The Fantoni palace of the fifteenth century housed the University of Saló, a body derived from the ancient Academy of the Unanimous
The civic theater, now under renovation following a long phase of abandonment.
The Terzi-Martinengo palace in Barbarano was built on behalf of the marquis Sforza Pallavicino captain of the Republic of Venice. It has a large park with beautiful fountains. The building is private property, therefore it cannot be visited.
The Lazaretto of San Rocco, built following a part of the General Council dated 7 June 1484
Natural areas
The Municipality of Saló is the most densely populated and most inhabited of the Alto Garda Bresciano park. Mount San Bartolomeo, which overlooks the city, is crossed by naturalistic and landscape paths up to its summit.