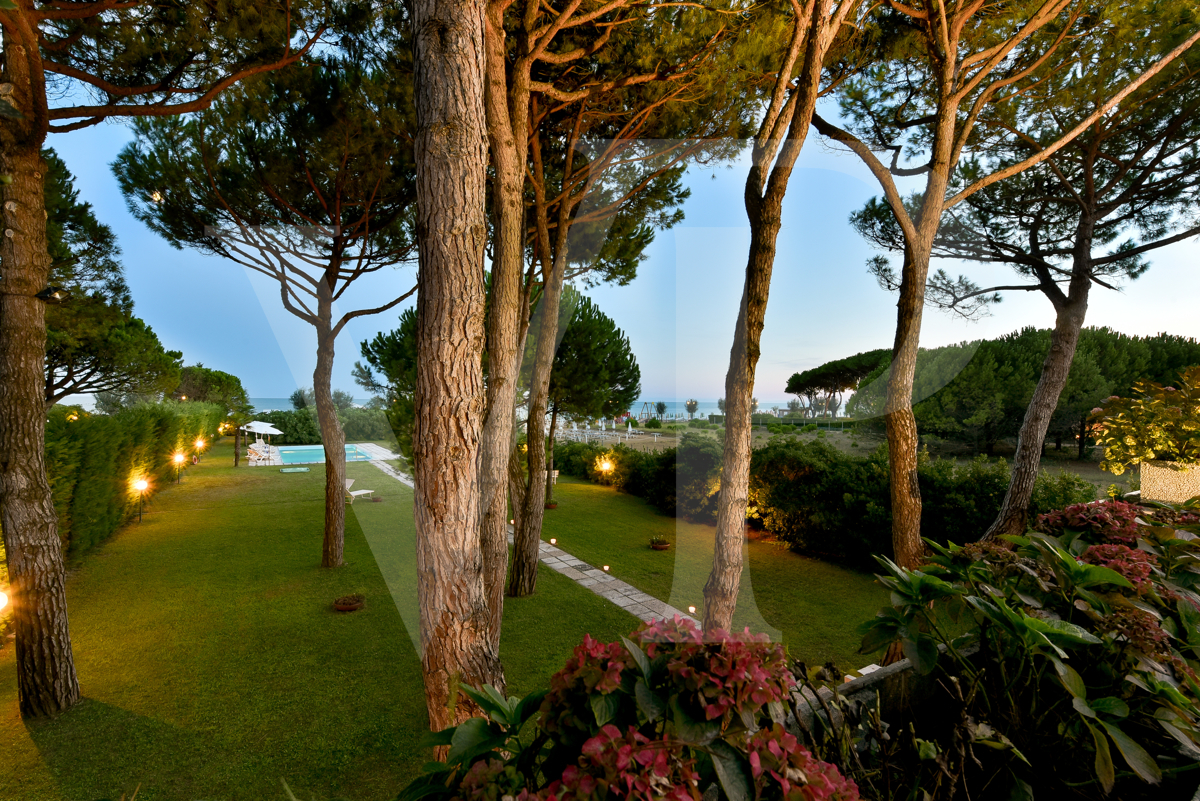 EXCLUSIVE BEACHFRONT VILLA WITH POOL AND DIRECT BEACH ACCESS
An exclusive Villa, with multiple spaces and different environments, designed to create an oasis of peace and relaxation thanks to the presence of a park directly overlooking the beach.

Built in the 1960s with an “H” shape, initially on one level, it has been renovated since 2009, respecting the original plan and redesigning its aesthetics with white and earth and sand colors.

The property is accessed through an automated driveway gate at the back where several cars are conveniently parked. The main entrance to the building is in the open gallery which also serves as a relaxation area in the middle seasons.

A bright living room of almost 50 m2 (538 square feets) offers a view of the front loggia and the park.

The well-articulated layout of this ground floor is divided into further rooms that form a whole but in fact allow living and using the spaces available as two distinct units.

To the left of the living room a modern kitchen complete with each appliance, a master suite facing the sea with a large bathroom and a further sleeping area, consisting of two other double bedrooms with custom wardrobes and a bathroom. From the rooms you can directly access the garden.

To the right of the living room opens the second apartment, through a living room facing the sea already equipped with kitchen fittings, hidden behind the bookcase. The corridor leads to the first large bathroom and to the two bedrooms, of which the master bathroom incorporates a second bathroom and an equipped dressing room. From the rooms you can directly access the garden.
The layout in the plan lends itself to using these spaces as a second apartment with an independent entrance, but with the same qualities as the main units, such as location and view.

A spiral staircase leads to the most incredible part of the villa: the upper floor, finished in 2017 and consisting of a glass and metal construction, with total transparency and brightness. This "winter garden", which can also be used in the summer thanks to the openable windows, is the same size as the living room below and serves as a living room with a luxurious "hidden" kitchen that can be opened by an electric control.

Leaving one of the windows of the living area, you can access the two panoramic terraces, from which you can enjoy a wonderful view of the park, the pool and the beach. Each terrace is bordered by large planters that create green walls, to guarantee privacy.

The master bedroom of this level is completely furnished to measure by carpenters who have been able to create the illusion of the presence of only cabinets, concealing inside the access to the cupboard disengagement and the very modern bathroom, characterized by a hull-shaped washbasin of boat.
From the bed, specially raised 30 cm (1 feet) above the ordinary, you can enjoy the sea view, even while lying down. The entire sleeping area is in green building, with walls that are thermally and acoustically soundproofed, covered with internal and external insulation: therefore enjoyable 360 ​​days a year. This floor, which in fact constitutes the third apartment, can also be accessed via an external staircase that is independent of the rest of the house.
----
LOCATION:
The Villa is in the quiet Pineta area of ​​Jesolo Lido, whose center can be reached in less than 10 minutes by car.

Located at the end of a secondary pedestrian street and directly overlooking the beach, it represents a "unicum" both in terms of characteristics and the unrepeatable position of the lot.
In fact, the coast offers a beach equipped in summer but far from the crowding that characterizes the Adriatic places, with silence and tranquility even in the middle days of August.

A convenient mini-market is 50 meters (164 feet) away. from the villa as well as the newsagent.
At about 900 meters (0.5 miles) , in the nearby Piazza Torino, the pharmacy, restaurants and shops of all kinds.

The nearby picturesque fishing village of Cortellazzo, the mouth of the Piave, with its river dock and many good restaurants can also be reached by bicycle.

The tollbooth of the A4 motorway of Noventa di Piave, near the eponymous Outlet, is less than 30 minutes by car and can be reached through secondary roads that flank the Piave river, thus avoiding the long summer queues that characterize the entrance to the other areas of Lido di Jesolo.
----
DETAILS:
The Villa has high quality finishes; each room has extra thick windows with double glazing and is equipped with a TV system, including satellite, and a heat pump air conditioning system, which can heat and cool.
In the bathrooms the heating is electric.

The ground floor is completely isolated from the ground by a cavity of over 40 cm. created on the original floor. The water utilities are separated by apartment and by garden / pool. Each apartment has its own electrical panel.
In the common technical room, externally accessible, there are practical shelves, the photovoltaic counter, the general electric panel, alarm, irrigation control and pool panel and an additional fridge used as a wine cellar.

The Villa is sold in body, including a large part of the furniture integrated into the house itself and of the garden and pool equipment.
A photovoltaic system supplies energy at zero cost to the pool equipped with automatic filtering of the enhanced water and connections for the eventual installation of heat exchanger, to bring the water up to 38°, and therefore make it usable even in medium seasons .

The garden's irrigation system is divided into zones, with a humidity sensor for optimal use of water, and the pumps are housed in an acoustically insulated container. The lighting is divided, partly with automatic night-time lighting and with headlights for the different areas of the park, swimming pool and pine trees.

Each unit is equipped with practical storage space for garden equipment
----
MORE INFO:
The Park with a rectangular plan of 120 meters for 20 (123 feet for 65), it directly overlooks the beach, from which it is hidden through hedges of Pittosphoro.
On the lateral border sides, evergreen hedges of Leylandi and Pittosphoro plants, some of which are many tens of years old.

Between the entrance to the sea and the illuminated swimming pool (of 14 for 7 meters - 45 feets for 22), a series of tall-trunked oleanders, which guarantee a continuous summer bloom. The pool is bordered by 4 palm trees, which can be illuminated at night.

The entire surface of the park is a lawn, with an automated zone irrigation system.

The spaces of sun and shade follow one another during the day thanks to the presence of numerous pines, which light up at night with a powerful lighthouse.
----
VON POLL REAL ESTATE
In the Best Location for You
Shop Vicenza
INFO: +39 0444 31 76 52

The property is located on the marked street/road.
The advertiser did not provide the exact address of this property, but only the street/road.
Click to move the map
Google Satellite View©Google Street View©