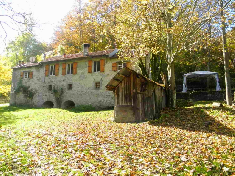 Distance from:
In the Regional Park of “Cento Laghi”, in the homeland of Bernardo Bertolucci, location which inspired his masterpieces… Our Mill is waiting for you!

Immersed in the quiet of woods and surrounded by ancient traditions typical of the mountains, the Mill of Riana offers the opportunity to discover or rediscover the historical, cultural and gastronomic riches of the region. Away from the hustle and bustle of tourism, during summer it’s the ideal place to enjoy all the beauty of the Apennines and to spend some periods of intimacy and relaxation away from normal daily routine.

Strategic Location
Thanks to its central position, the Mill of Riana is well linked up to the most important places of interest nearby : Parma, Le Cinqueterre, Pisa, Florence, Genoa, Mantua, are easily reachable by car, allowing you to embrace the entire panorama of Italian Art from Early Middle-Ages till Renaissance, up to Mannerism.

The House
At the main entrance stands an ancient stone sink and one of the two original millstones of the Mill. In the past it was used to grind chestnut or wheat because it was possible to divert the flow of the material  through a channel that starts from the top floor (which still exists).
On the groundfloor there is a bedroom with a stone floor and authentic wooden beams with a pellet stove which can be programmed to start when you wake up. Next to the room you will find the bathroom with toilet, bathtub, washing machine and boiler for hot water.
At the upper floor, which can be accessed directly from outside, there is the living room with satellite TV and two single beds that can be joined into one. There is also  a pellet stove ready to be programmed according to the use of the hall. A trap door connects the lower floor with the upper one and it can remain closed for children’s safety.

Next to the living room, in the kitchen, there is a table for six people or more, with cutlery, cockery, kettle, tea towels, gas heater and wood burning for those who want to rediscover the romantic atmosphere of the stove.
On the opposite sides of the upper floor there are two double bedrooms, one with a french bed and a digital piano (for those who want to enjoy music) and the other with a double bed and a top bed: children always have fun sleeping in a top bed!

Activities, shopping and dining
In the winter season, the Park, besides skiing facilities, offers you naturalistic paths on foot or by horse, fishing and other typical activities of the region. Pets are more than welcome and the main towns where to buy supplies and shopping are Monchio delle Corti (where resides the Head Office of the Parco dei Cento Laghi) and Corniglio. A Lidl Supermarket is settled in Langhirano.

History
Since ancient times until fifty years ago, the Mill represented one of the most important resources for food in Val Bràtica. It was built on a soft slope between two rivers, Canalaccio and Bràtica, a strategic location to exploit the natural inclination which allowed water to be diverted from the first stream, to fill the ditch above the house, and channelling it under two arches in order to push the blades which powered the Mill.

The Surroundings
This Apennine territory since the pre- roman age was the  land of  inhabitants, whose footprints are nowadays still alive. Ligurians, Romans and Longobards have left in infrastructures, uses and languages, signs of a passage which characterized the mountain’s physiognomy; in toponymy, from the mediolatin expression “Montium Curtes” (The Courts of Monchio) it seems that it takes its origin from the actual name of the main villages , Monchio delle Corti; the variety of churches, inside and in the surroundings of which it’s possible to find works of considerable artistic interest which testify to the ancient power of the bishops of Parma from 941 to 1805.  A remnant of this power is to be seen in the village of Lugagnano, where it is possible to see the bridge rebuilt by Ferdinando Farnese in 1602. During the Second World War the mountains were an enormous battlefield and you can still find many commemorative tombstones in honour of Partisans who fought against the Nazi-fascists.

Cinema and Poetry
The Mill was a crossing point of important characters of history and Italian culture. Together with Bernardo and Giuseppe Bertolucci (authors of Novecento, The Last Emperor, Last Tango in Paris, The Dreamers, Berlinguer ti voglio bene, etc…) this place has included the presence of characters like Roberto Benigni, Pier Paolo Pasolini and Giorgio Bassani. Last but not least, Attilio Bertolucci was one of the most important poets of the last century and we are proud to have met him and we are still excited by his words.