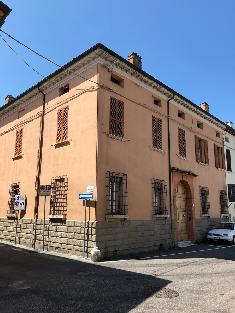 Distance from:
Prestigious building of the seventeenth century, consisting of half of an original aristocratic building. The residence on two floors plus attic parts, consists of 13 large rooms, some with vaults, more facilities, large entrance and artistic stairs as well as an internal courtyard of about 100 square meters. The covered living areas amount to around 500 sq.m, of which around 80 require renovation. The property is equipped with condensing boiler and ground-mounted photovoltaic system.
The property is located in the historic center of Bagnacavallo (about 20 thousand inhabitants) in the province of Ravenna (Emilia Romagna) and is surrounded by other historic houses as well as some rich churches of artistic interest and monuments and monasteries-convents, dating back mainly in the sixteenth and seventeenth centuries.
Bagnacavallo is one of the most interesting villages in the whole of Romagna, renowned for its historic center, preserved over the centuries, its traditions and its logistical location of absolute interest. Just 45 minutes from Bologna airport,
thanks to its proximity to the motorway and railway infrastructures, it is possible to easily reach a wide range of sites of global interest while benefiting from the tranquility guaranteed by the life of the province.
In addition to the nearby Ravenna (20 km / 15 min.) Capital of the Eastern Roman Empire, rich in Byzantine monuments and mosaics, Venice and Florence (around 120km./90 min.), Bologna (50km./40 min. ) and the locations of the Adriatic Sea with Rimini (60km./45 min.).
This text has been automatically translated.
See the descriptions entered by the advertiser

Are you already registered?
Log in
Why should I register?

Log in to MyGate-away
to use the tool Score

Log in to MyGate-away
to use the tool Notes