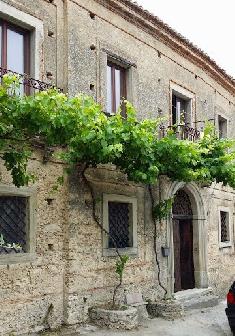 Distance from:
For sale detached house in Gerace, one of the most elegant and evocative historic villages of Calabria.
Gerace is a small town located on the heights of Locride at about 500 meters above sea level, within the Aspromonte National Park.
Gerace is one of the so-called Enchanted Villages of Italy, where there are many ancient churches, among which the famous Cathedral of Santa Maria Assunta, Norman building, declared an architectural asset of national interest, and the fortified Norman Castle stands out.
In summer, the village comes alive with tourists who come to visit the artisan shops and spend the evenings admiring the view that can be enjoyed from the so-called Bombarde, a walk that allows you to admire the whole town from above.
In summer there are also many typical folk performances.
The coast, with its very long beaches, both free and equipped, is just 8 km from
Gerace.
The house was built adjacent to a medieval tower that still exists, which is a historic monument. Next to it there are two small rustic cottages and a small garden that are part of the property.
The house, independent, faces two sides, angularly, with a south-east exposure that makes it particularly bright.
The view from the 4 external balconies, plus two windows, allows a view of the whole coast from above, starting from Roccella to Africo, very suggestive in the evening.
The house has two floors:
on the ground floor, entering from the door on the left, there is a large basement of about 40 square meters, with windows equipped with railings, paved and equipped with water and electricity.
Going up the ancient stone staircase leads to the entrance of the apartment.
The entrance, which can also serve as a dining room, faces one of the 4 balconies.
On the left is the kitchen, with a window, and a bedroom with two balconies.
To the right of the entrance is the larger bedroom (30 sqm) with balcony and window, a spacious dressing room, and finally a bathroom with sink, bidet, shower, large window and washing machine. The bathroom has been recently renovated and never used.
The windows have been partially changed and are made of aluminum with a wood effect.
The house is easily and quickly reachable on foot from the main national road, where there is parking space.

In the photos there is an ancient tower which is not owned but is a monument and is attached to the house.
The cottages on the back can be used as garages or warehouses.
With the car you can get up to the front door of the house.

This text has been automatically translated.
See the descriptions entered by the advertiser