Properties for sale in Puglia 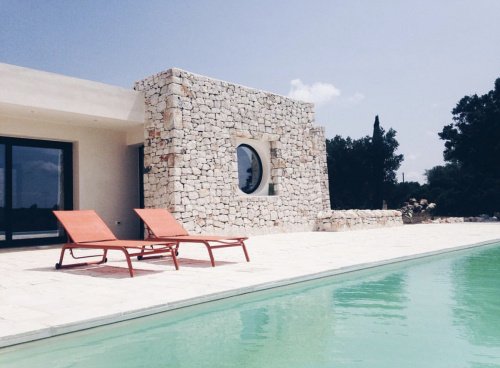 Homes for sale in Puglia

With its warm, dry climate, rolling countryside and beautiful beaches, Puglia has plenty to offer foreign investors seeking a sleepier pace of life in the sunshine. In this region in the heel of Italy’s boot, ancient towns mingle with sophisticated seaside resorts, sweeping olive groves and exceptional views. Add to that delicious locally produced foods and wines and you’ll have a good idea of why Puglia is becoming increasingly popular with property buyers.

Bari, the region’s capital, offers urban appeal for those wanting to be surrounded by amenities, but it is also a great base to explore Itria Valley, famous for its abundance of typical white stone houses with conical roofs, called Trulli. Renovated Trulli can be snapped up in towns such as Alberobello, a UNESCO World Heritage Site, from approximately €60,000, while those looking for a project can purchase a Trullo in need of restoration from around €20,000 to €30,000.

There are also many homes for sale in Puglia in coastal areas, with prices starting from around €1,400/m² in areas such as Barletta, Bisceglie and Trani in the province of Barletta-Andria-Trani, while a new one-bedroom apartment near the beach in Taranto can be purchased for as little as €30,000.

The Salento region covers the southernmost part of Puglia and is one of the most popular areas, with properties on both the rugged Adriatic coast and the sandier Ionian coast, and the delightful town of Santa Maria di Leuca nestled between the two. It is also home to dreamy historical cities such as Lecce and Gallipoli.

What are some of the best cities in Puglia?

Arguably the most beautiful city in Italy and known as the Florence of the South, this charming university town is awash with Baroque architecture – complete with gargoyles and gremlins – as well as piazzas and eateries where you can while away the hours. As property hunters recognize its potential, its popularity is increasing, making it a sought-after destination for buyers.

Perched on a hill overlooking the Adriatic, this beautiful maze of white-washed houses is a magnet for tourists and foreign property buyers alike. Nicknamed the White City, it is a feast of spectacular vistas of the surrounding countryside and the Adriatic Sea, with charming alleyways and arches at every turn and a stunning Cathedral as its shining star. Its proximity to the coast is an added allure.

Famous for marking the end of the Appian Way, Brindisi has a relaxed, seaside vibe and boasts several archaeological gems in its charming old town. Palaces dating back to the 17th and 18th centuries intertwine with picturesque churches and piazzas, while the more modernized areas boast wide tree-lined avenues dotted with shops and cafés.

Puglia is a laid-back region with more affordable property prices than in the north. Buyers often choose countryside properties with some land, close to a small town, so that they can enjoy the benefits of a peaceful rural life and possibly grow their own produce, but still be near to local amenities and transport links to bigger cities.

Property buyers interested in history and culture will not be disappointed either, with Byzantine, Roman and Baroque influences pervading the Apulian towns. In Ostuni, a renovated one-bedroom house in the historic center can be purchased for around €70,000, or a typical Lamia in need of renovation can be found in the region of €30,000 and above.

Properties with pools allow you to make the most of the lovely warm weather, but with so many blue flag beaches and hiking and cycling trails in the countryside and along the coast, there are many ways to enjoy the great outdoors in Puglia: sampling some of the high-quality local produce and wines in one of the piazzas in your local town is another.

With its relaxing ambience and year-round sunshine, Puglia is an ideal location for a second home or retirement property in Italy, or as an investment.